Something is rotten in the state of Ausone. APM asked a local trader for a price last week and he told us that “Ausone is toxic”. Now, whenever sentiment is that bad against a company and its share price is plumetting, you ask yourself two questions: is the company going bust? Or is this a situation to keep an eye on with a view to cheap acquisition?

So, what’s the back story? Ausone has a pedigree second to none. The chateau has been producing wine for longer than anyone else in Bordeaux, and it is blessed with what is commonly considered the most enviable terroir in the whole region. “The steep, hillside terroir with its grades of 15% to 20% is clay with limestone, and limestone over asteria limestone in the soil. This is what gives the wine of Chateau Ausone its intense mineral character.” I’m not surprised. That’s a lot of limestone!

Notwithstanding, for a great many years Ausone was considered not merely alongside the First Growths of the Left Bank, but as equivalent until very recent history to the mighty Petrus. Le Pin is a mere parvenu in comparison with Ausone, having produced its first wine in 1979. Ausone is “the wine connoisseur’s wine”, and so on. It should be on your bucket list.

As we know, the more recent fortunes of Petrus and Le Pin have been tied somewhat inexorably to the status of Robert Parker, whose rave reviews have propelled their prices to stratospheric heights. Undeniably, scarcity also plays a part in this. Le Pin’s annual production is between 400-600 cases, similar to someone like Domaine de la Romanee Conti, whose prices, incidentally, are around 5 times higher. That’s right. You don’t get much change out of £100,000 for a case of any vintage of DRC.

Petrus, meanwhile, produces around 2,500 cases a year, which although more than Le Pin is still dwarfed by the 15-20,000 cases produced by most First Growths. This becomes very important when you consider that fine wine is not only a drink, but also a “collectible”.

Collectors of “passion items” do so in the knowledge that not many other people own them. You might have to wait 30 years or so before supply of a high production fine wine starts to really taper off, at which point pricing becomes much more akin to such as prevails in the fine art market. This effect becomes noticeable much sooner in smaller production producers, like Petrus, and obviously Le Pin and DRC.

So, where does all this put Ausone? Ausone might have a pedigree to equal the best, but does it have scores to match? Since it is unarguably Robert Parker who has drawn the world’s attention to Le Pin, and although JF and Jackie K famously enjoyed Petrus, Robert Parker Jr’s interest has done it no harm at all either, so I think we can happily use his scoring system as a point of comparison.

Going back to the last great vintage of the 80s, the 1989, the average scores are as follows:

Nothing the matter with Ausone there then. But it’s worth remembering that Ausone was revamped towards the end of the 90s, so how do scores look since 1999?

Ausone, then, has indisputable pedigree, and quality. If you now factor into the equation that it produces only 1,500 cases per year, you have to wonder what on earth is going on in the market place right now. How can this wine be a pariah?

Let’s have a look at the price differential of three comparable 100 pointers from two great vintages. 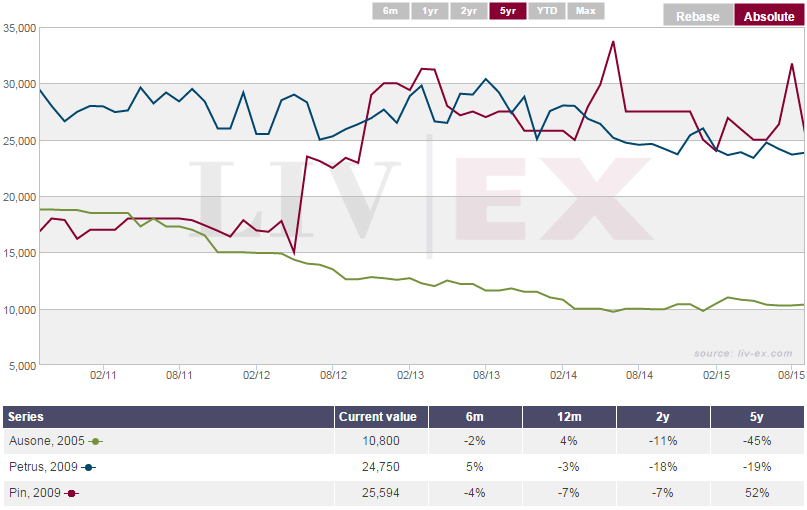 We are seeing here the price comparison in absolute terms. The Petrus and Le Pin are around £25,000, the Ausone barely £11,000. Note the hike in the price of Le Pin. This resulted from the Parker upgrade from 95-98 to 100. If you were in any doubt about the Parker influence, there it is again.

Now let’s look at the comparison from slightly lesser vintages, but where Ausone still scored well. The 2001 vintage in Pomerol scored 90 points, as did the 2003 in St Emilion, so we have equivalent vintages. Ausone scores 100 points, Petrus 95, and Le Pin 98. 100 point scorers typically trade at a generous premium. Not the Ausone 2003! 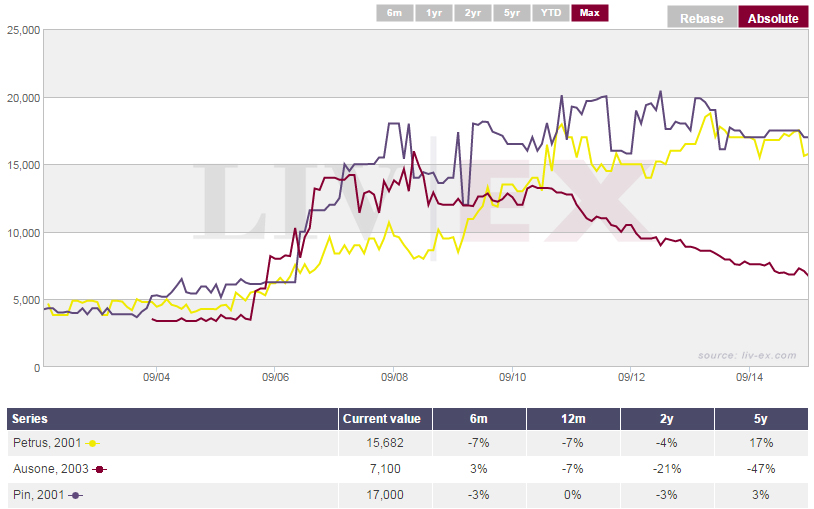 Now we see something very interesting happening. From the initial rally through to 2009 Ausone is right in the game, however it doesn’t participate in the second phase up to mid-2011, and clearly underperforms quite badly in the correction, whilst the Petrus and Le Pin hold their own. Why might this have been?

I have heard several explanations, from poor marketing to the fact that “it just didn’t catch on in China”, some of which I am sure contain a kernel of truth. Let’s look at the price action a bit more closely. The following chart details the performance of the 2003 and 2005 against the Liv-ex 100, rebased. 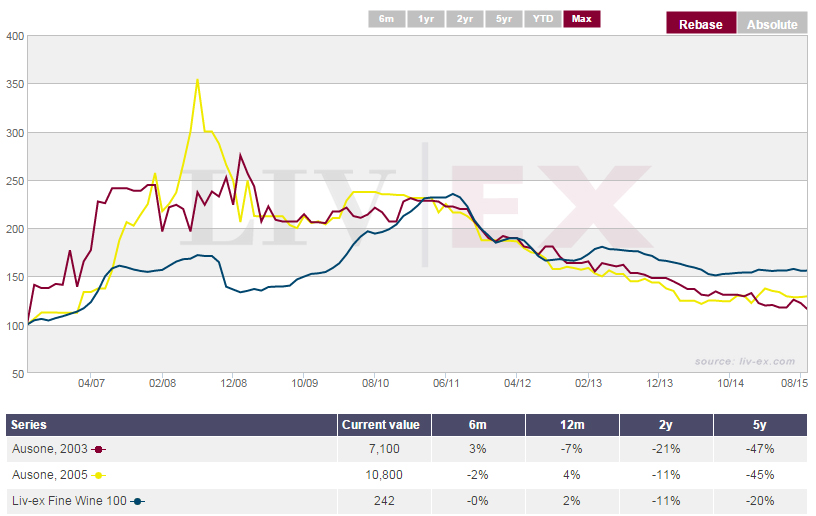 This reminds me of that song by The Specials: “You’ve done too much, Much too young.” Perhaps the sheer degree of outperformance against the rest of the market has been the cause of the subsequent trouble. Once the slide began, investors, speculators, buyers of whatever hue, were watching a falling knife, and over time, the name became discredited. This argument stacks up if you look at how the Petrus and Le Pin performed against the same index during that period, again rebased: 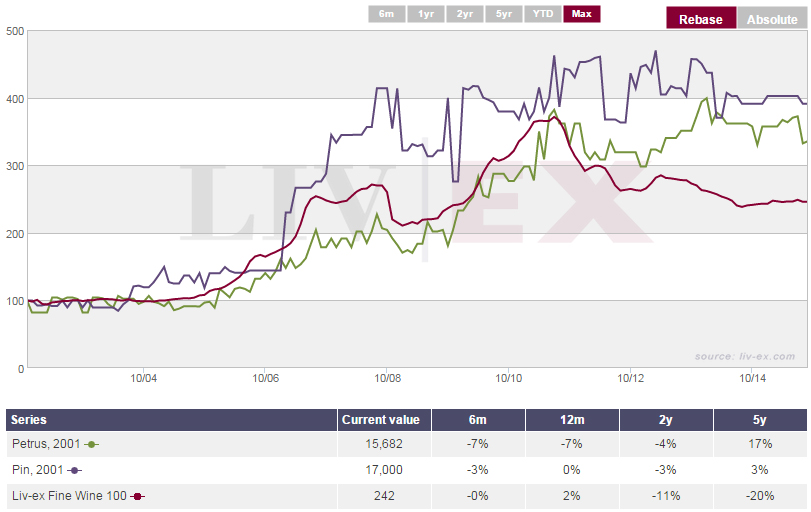 Petrus seems to have performed in line, then at the time of the correction was likely “bailed out” by a combination of pedigree and scarcity. Le Pin was likely bailed out by scarcity, but even it didn’t achieve the same euphoria in the early run as the Ausone ’03. 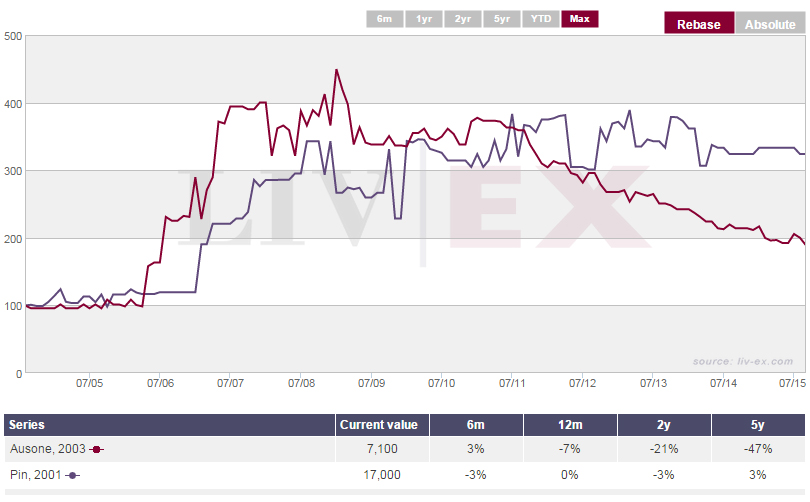 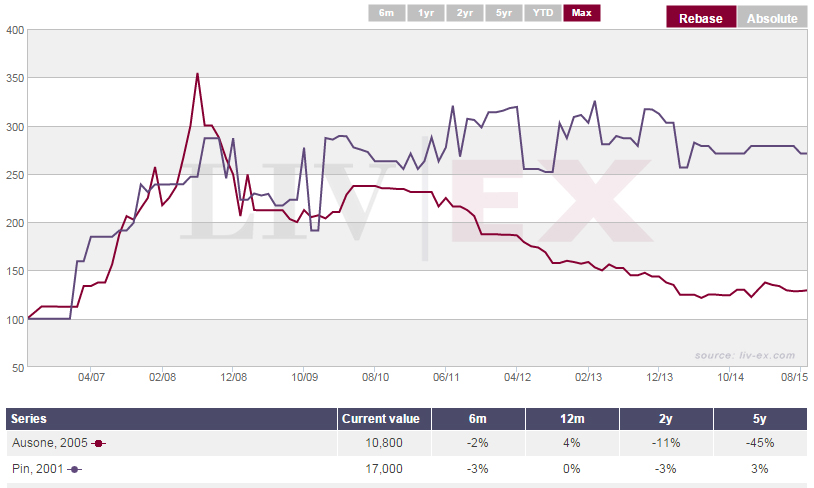 So, as they say on “A Question of Sport”: what happened next?

In a stock market context, it can take a while for a discredited company to regain its former glory, but at the same time, the best returns are made by buying companies which the market thinks are bad, but which are not as bad as they seem. If you know something no-one else does, or which everyone is ignoring, you are likely on to something.

Ausone has not become a bum producer over the last 5 years. Its heritage is still very much intact. Hear what Robert Parker has to say about the 2012 vintage:

“One can’t say enough about the amazing job that Alain Vauthier and his daughter have done at this historic property on the decomposed limestone slopes of St. Emilion. Not surprisingly, the 2012 Ausone is one of the candidates for the wine of the vintage.”

Obviously we at APM have no idea exactly when current opinion will change towards Ausone, but since fine wine investment is for the long haul anyway, we would very strongly argue in favour of including Ausone in the portfolio, particularly when sentiment is currently so much against.